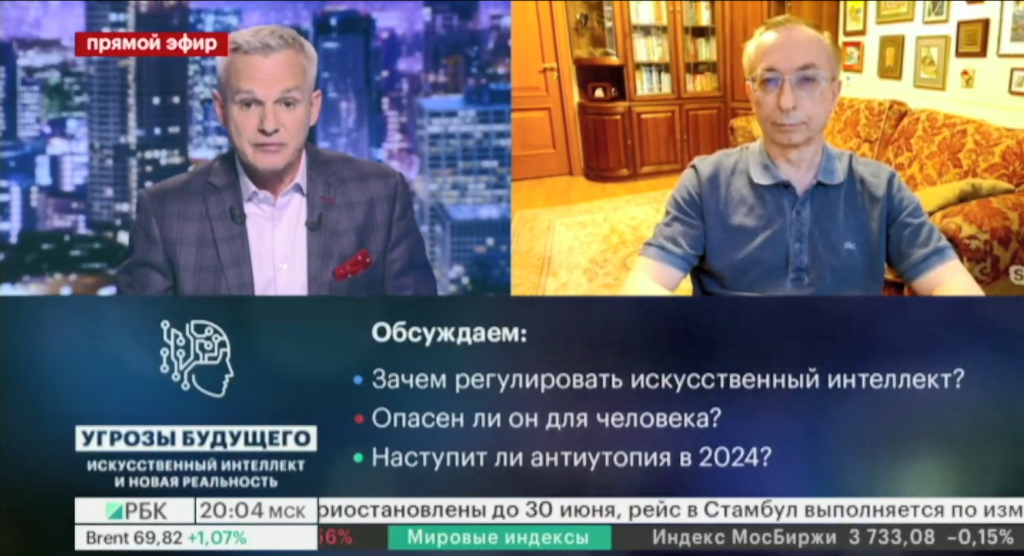 Yuri Hohlov spoke in the What Does This Mean? on the RBC channel

On May 28, 2021, Yuri Hohlov, chairman of the Board of directors of the Institute of the Information Society answered to the questions of the host of the program “What does this mean?” Yuri Tamantsev on the RBC TV channel in a live broadcast.

The presenter noted that artificial intelligence is already among us and that all this resembles the plot of a science fiction film. But what kind of film will it be – a drama, an action movie, a horror or an adaptation of George Orwell’s dystopia “1984”, but only in real life? That this could become a reality as early as 2024, says Microsoft President Brad Smith. Artificial intelligence will soon be difficult to catch up, he said. China may become the world leader in AI in the coming years, and its capabilities here already exceed those of the European Union. What to do if AI gets out of control, whether the world plunges into the abyss of digital lawlessness – such questions are of concern to many today. The chairman of the US National Security Commission on Artificial Intelligence Eric Schmidt, the former CEO of Google, warned that the democratic world simply needs to surpass China in the field of AI. To this end, he proposes to pool resources to develop appropriate national and global strategies. Otherwise, in his opinion, we will have to get used to completely different, imposed values.

The presenter asked Yuri Hohlov if Mr. Smith’s fears that the decisive role of the state in the field of artificial intelligence was a threat to democracy around the world were true. At the same time, only appropriate laws can protect society from this, and they will be adopted by the state, too. There is a certain contradiction here.

Yuri Hohlov replied that laws are not adopted by the government, but by legislative bodies, which are formed from representatives of various strata of society. These are not executive bodies, although they also play a very important role here. It is not only the state that can protect us. Laws only formalize what happens in real life, that is, the practice of relations between subjects. Everything depends on what kind of relationship we will establish among us and what kind of relationship we can realize. And technologies are neutral – they can be used for good and for evil, including artificial intelligence technologies. As for Smith’s claim, the United States is indeed losing the race to develop artificial intelligence technologies to China. They have fundamentally different political systems, and he understands well that whoever becomes a leader in the technological field will promote his ideas about how life is arranged correctly. It is not possible to stop China: no restrictions and sanctions help. The alarmist statements of American entrepreneurs and scientists are primarily related to their desire for the American government to support American high-tech business more. And this support is expressed not only in money, there are other measures as well.

Another question of the presenter was related to the need to regulate the development and application of artificial intelligence technologies.

Yuri Hohlov expressed the opinion that regulation is to some extent necessary, but it still will not put all barriers to the use of these technologies. It depends on many factors – after all, we can use them as we like: even for military purposes, even for peaceful purposes, and here it is not a matter of technology or even of the laws that we will write.

Further, the presenter asked if artificial intelligence really exists and what machines, more precisely programs, can do today.

Yuri Hohlov tried to dispel fears and concerns: we will not see the skynet for a very long time. The so-called general or strong artificial intelligence will not be created in the coming decades. We can solve certain tasks, for example, face recognition, which is so much talked about today. Or tasks related to the possibility of algorithmic calculations of games, such as chess or go. Here the computer is obviously stronger than the human, because today’s computing power and algorithms already allow working out game solutions much faster than humans.

The presenter also asked a joking question whether a machine can solve a problem that a human solves almost every day: go there, I don’t know where, and bring that, I don’t know what.

Yuri Hohlov reacted that AI would definitely not be able to solve such a problem, but it could quite successfully solve the problem “go there and buy this”. And this is already happening before our eyes.

The recording of the program and the interview with Yuri Hohlov can be viewed on the website of the RBC TV channel (in Russian).