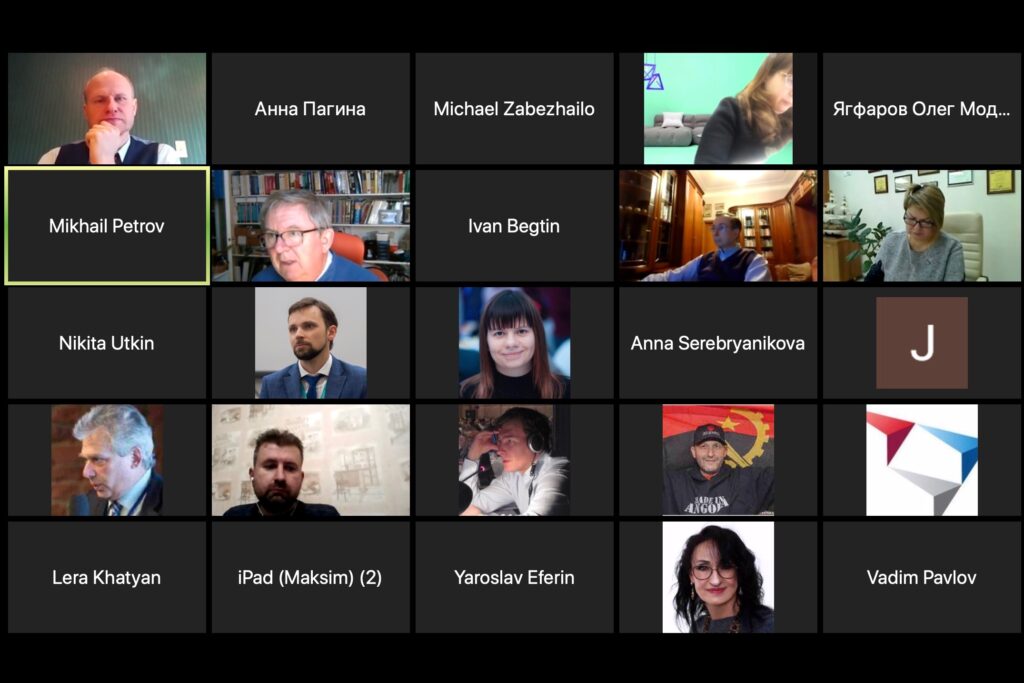 With the support of IIS, an expert session “Data as Infrastructure” was held under the auspices of the World Bank

On December 15, 2020, the online cycle of expert sessions on data policy “Data as a key factor in the competitiveness of the Russian economy” was continued. As part of the second session of the cycle, an expert discussion on the topic “Data as Infrastructure” took place. The session was organized by the World Bank in cooperation with the Agency for Strategic Initiatives (ASI) with the support of the Institute of the Information Society in order to clarify the provisions of the forthcoming World Bank report on the data economy in Russia.

Let us recall that the first expert session, organized by the World Bank jointly with the National Center for Digital Economy of the Lomonosov Moscow State University and the Institute of the Information Society, was held on November 24, 2020 and was devoted to discussing Russia’s policy in the field of ensuring trust in the data ecosystem.

The meeting was moderated by Vera Adaeva, head of the ASI Center for digital development, and Oleg Petrov, lead digital transformation specialist of the World Bank.

Vera Adaeva described the key tasks of the expert discussion: to look at the practices already presented in the report and express an attitude towards them; to suggest new practices and formulate recommendations.

Oleg Petrov drew attention to the fact that after the publication of the report “Competing in Digital Age“, the World Bank began preparing a study on the development of the data economy and data management policy in Russia. A new World Development Report 2021 “Data for Better Lives” is now being prepared and will be published in a few months.

Renaud Seligmann, Country Director for Russia of the World Bank, noted in his opening remarks that a future report on data policy in Russia will raise data management issues that are strategically important for the further development of the economy: the development of a data management system for federal and regional levels; the means by which access to the national data resources of the authorities, business and citizens is created; consistent governance across the entire data ecosystem, updating and coordinating applicable rules, regulations and standards.

The World Bank study is based on a conceptual framework for analyzing national data policies in the leading countries of the world, which consists of three main components: 1) data as infrastructure (policies designed to ensure reliable data governance); 2) data trust (policies that build and maintain trust in the data ecosystem and its associated institutions); 3) data value (a policy that encourages and facilitates the creation of value through data).

Andrew Stott, WB Consultant and one of the authors of the report, elaborated on the content of the first component. Considering data as an infrastructure involves analyzing the following aspects: data management, information security, quality and standards, master data / de-duplication.

One of the Russian authors of the report, Yuri Hohlov, Chairman of IIS Board of Directors, spoke about the peculiarities of using data as an infrastructure in Russia.

“We stress that a prerequisite for the use of data by various stakeholders at the national level should be the presence of a mature digital infrastructure for data transmission, storage and processing,” the speaker noted.

He outlined large-scale national projects for the development of telecommunications infrastructure for working with data and for the formation of a computing infrastructure.

“One of the lagging zones for Russia is the development of a supercomputer infrastructure for working with data, a high-performance computing infrastructure. Unfortunately, we are losing our positions in the top 500, despite the launch of Christophari, the most powerful supercomputer in Russia, by Sberbank in 2019,” the expert shared.

Turning to industrial digital platforms, Yuri Hohlov said: “In order to get the maximum benefit, to receive effects and dividends from the use of data, it is necessary to develop digital platforms in which these data are processed. Recent trend not only at the global level, but also in Russia is the formation of digital platforms ecosystems, which are characteristic of advanced business. Here I would like to highlight several large projects to create digital ecosystems for working with data that are being implemented in Russia. These are the projects of Sberbank, Yandex, Mail.ru Group, MTS and other companies. A powerful consolidation of data processing is taking place as they plunge into ecosystems of interconnected digital platforms that previously solved separate problems, but now provide the entire range of services for the user via one single superapp.

According to Yuri Hohlov, the ecosystem of digital platforms of Russian authorities is developing along the same path: “We started a decade ago with the e-Government Infrastructure, which consists of a number of components, and supplement it with new digital platforms, which will allow working with government data not only to solve the government tasks in interacting with businesses and citizens, but also by providing services and data collected in government platforms to businesses and citizens for their interaction with each other.” The expert also noted that large data sets are created, used and managed by academia, whо are also interested in working with data.

At the end of his speech, Yuri Hohlov presented conclusions and recommendations, which are mainly addressed to the federal government. In addition, according to the speaker, it is important to address recommendations to other stakeholders, including business, civil society and the academia.

Two Russian experts, Mikhail Petrov, director of the Digital transformation department of the Accounts Chamber of the Russian Federation, and Ivan Begtin, general director of the Association of Data Market Participants, gave their detailed comments on the provisions contained in the chapter “Data as Infrastructure” of the draft report.

In response to Ivan Begtin’s speech, Yuri Hohlov noted that Russia needs a clearly formulated national data strategy. At the same time, according to him, the concept of the National Data Management System can hardly pretend to be such a strategy. “Apparently, this should become the main recommendation of the report: Russia needs its own national data strategy, addressed to all stakeholders (government, business, civil society, academia),” Yuri Hohlov said.

Then a panel discussion took place, which was attended by:

Yuri Hohlov, together with the moderators of the session, thanked the experts for their comments, noting: “Our task is not only to have a vertical dimension of data governance associated with the public administration in Russia (we are talking about the federal and regional levels, and also about the level of local self-government). But no less important are the culture of data governance and the formation of a data ecosystem that extends to other branches of public administration (legislative, judicial).”

He also announced a third panel session on the value of data, as well as a discussion on data regulatory issues. These meetings are scheduled to take place in January 2021.