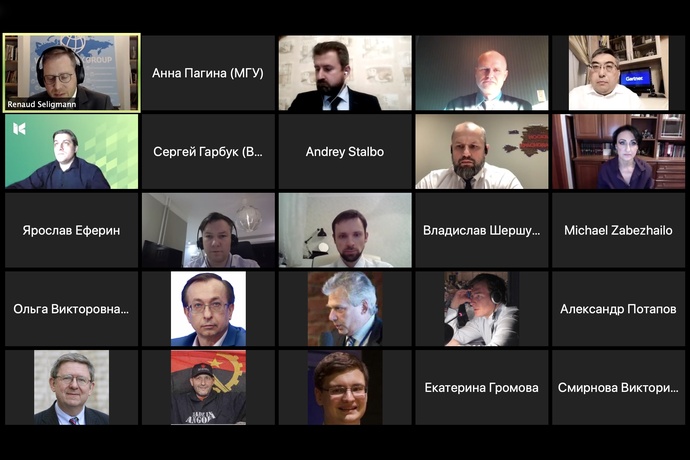 On November 24, a series of expert sessions on data policy issues “Data as a key factor in the competitiveness of the Russian economy” was launched. As part of the first session, an expert discussion of Russia’s policy in the field of ensuring trust in the data ecosystem took place. The first session of the cycle was organized by the World Bank in cooperation with the National Center for Digital Economy of Lomonosov Moscow State University and the Institute of the Information Society in order to clarify the provisions of the forthcoming World Bank report on the data economy in Russia.

The session was opened by Renaud Seligmann, Country Director for Russia of the World Bank. The speaker said that over the past year, the World Bank, in cooperation with representatives of government authorities, development institutions, academia and private business in Russia, conducted a study to determine strategic objectives in the field of national data use policy. Based on numerous interviews and events with the participation of Russian and international experts, a draft analytical report on the development of the data economy in Russia was prepared.

However, the events of 2020 (including the coronavirus pandemic and the exceptional measures taken in connection with it to the massive use of data-based management principles) made researchers think about a partial revision of some of the conclusions of the draft report. “Today, with our partners – colleagues from the Institute of the Information Society and the National Center for Digital Economy of Lomonosov Moscow State University – we want to launch a series of expert discussions on the development of the data economy in Russia, and start with the most pressing topic of today – a policy aimed at ensuring trust in data, ”said Renaud Seligmann.

“If the population does not trust the state with their personal data and does not believe that the data will be safe in the hands of the government, then people will not share them. And that can be a real problem. What will be the result of such a policy if there is no trust? Therefore, the national policy should be aimed both at ensuring the protection of personal data and at the effective use of technological solutions, ”said Renault Seligmann in his speech.

Prasanna Lal Das, lead knowledge management officer of the World Bank and the lead author of the forthcoming report, spoke about the conceptual framework for analyzing national data policies of the leading countries of the world, which was the basis for the study. This schema, developed by the World Bank, has three main components: data value (policies that encourage and facilitate the creation of value through data); data trust (policies that build and maintain trust in the data ecosystem and its associated institutions); data as infrastructure (policies designed to ensure reliable data management).

Yuri Hohlov, Chairman of the Board of Directors of the Institute of the Information Society, head of the project “Monitoring and Standardization of the Development and Use of Big Data Storage and Analysis Technologies in the Digital Economy of the Russian Federation” voiced the recommendations presented in the draft report on ensuring trust in the data. Yuri Hohlov focused on such aspects of this issue as personal data, data ethics, sovereign internet and data localization.

Further, within the framework of the panel and open discussions, 13 experts also expressed their opinion on the recommendations presented:

In his speech, Sergei Garbuk, in particular, mentioned the Data subcommittee (PC 02), which is part of TC 164, the secretariat of which is performed by the National Center for Digital Economy of Lomonosov Moscow State University within the framework of the NTI Competence Center program on big data.

The moderator of the meeting, Tatiana Ershova, general director of the Institute of the Information Society, thanked the participants for their active participation in the discussion of the section of the report and expressed hope for the same productive cooperation in the next sessions of the cycle.

“The World Bank is currently conducting global national research on data-driven development. These issues are essential for the economic, social, political agenda around the world. The problems raised during this discussion, especially in the context of the crisis caused by the pandemic, are of very great importance not only for Russia, but also for other countries. Their understanding will contribute to universal prosperity and the fight against extreme poverty on the entire planet, ”Tatiana Ershova noted.

“I would like to touch upon one more aspect related exclusively to Russia: the work on the preparation of the Russian-language version of the report … was extremely important for the development of the Russian-language terminological base in the field of the digital economy … The National Center for Digital Economy in 2019-2020 based on the results of the corresponding research work within the framework of the state assignment created a glossary, which currently includes 210 basic terms with English equivalents, synonyms and definitions. We hope that this work will be very useful to the Russian expert community, ” added Tatiana Ershova.

Moderator Oleg Petrov, lead digital transformation specialist of the World Bank, also thanked the session participants, noting that the experts’ comments would be carefully studied and taken into account when preparing the final version of the report. The moderator shared that in December it is planned to hold a session on data as an infrastructure, in January – sessions on the value of data and legal aspects in a similar area. “We hope that the work will be completed by the end of January, the report will be published shortly after that,” said Oleg Petrov.