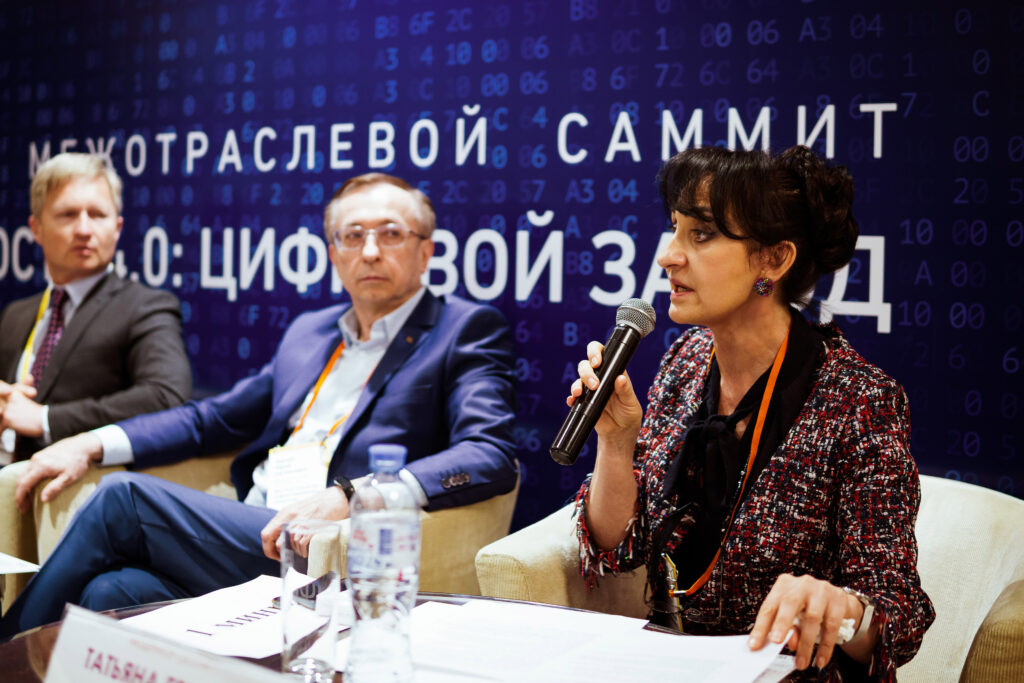 On September 15 and 16, 2021, the IV Russian Intersectoral Summit “Industry 4.0. Digital Factory” was held, which was attended by over 200 representatives of large industrial companies in Russia. The event was supported by the Ministry of Industry and Trade of the Russian Federation, FSTEC of Russia and the Department of Investment and Industrial Policy of the city of Moscow.

The program of the first day of the Summit (September 15) began with the strategic congress “Digital Opportunities for Industry”.

The business program continued with the Big Data and Data Analysis session (sponsored by Paessler AG). The session was moderated by Tatiana Ershova, general director of the Institute of the Information Society (IIS).

The first report was presented by Yuri Hohlov, chairman of the IIS Board of directors, head of the Big Data Standardization Project at the NTI Big Data Competence Center at Moscow State University.

At the beginning of his speech, Yuri Hohlov answered the question: why standards are needed if they (as opposed to regulatory legal regulation) are not mandatory for application.

First, standards are concentrated knowledge, especially when it comes to international standardization. They give a very well-established and consensus-based idea of ​​what there is to work with big data, what systems should be to work with them and the architecture of such systems, how it is worth carrying out certain processes. Second, if an organization follows standards, its systems and services (both existing and newly created) will be interoperable, that is, compatible with others. This allows industry participants to share data, build better solutions and conduct analytics based on it.

The more complete the stack of standards that allow the consistent development of technologies for working with data is, the higher is the chance that all players – business, government, non-profit sector – will be able to derive social and economic benefits. Research shows that between 1% and 1.5% of a country’s GDP is increasing through the concerted widespread application of standards.

According to Yuri Hohlov, the standardization of big data started rather recently – about 10 years ago. This activity was initiated by the US National Institute of Standards and Technology’s Big Data Working Group, which pioneered a national big data standards stack.

For example, last year, ISO and IEC finally approved a series of five international standards that describe a big data reference architecture. “This knowledge can and should be used when you create, purchase or use these or those systems for working with big data, since all manufacturers follow these standards,” noted Yuri Hohlov.

At the same time, new standards are being developed. A standard related to Big Data Analytics Management Process Framework is coming soon. A decision has been made to create a series of standards dedicated to data quality issues for analytics and machine learning.

According to Yuri Hohlov, the standardization of big data in Russia began in 2017. It was handled by the Internet of Things Association, the Russian Venture Company and the Cyber-Physical Systems Technical Committee (TC 194). In 2019, this activity was transferred to TC 164 “Artificial Intelligence”, where the subcommittee “Data” operates. Its work is supported by the NTI Competence Center for Big Data, Moscow State University.

So, on November 1, 2021, the first Russian standard in the field of big data, elaborated by the NTI Big Data Competence Center of Moscow State University and the Institute of the Information Society, will come into force. The document establishes Russian-language terms and their definitions necessary when working with big data, and is harmonized with the international standard.

“Now we have a whole series of standards coming out,” Yuri Hohlov shared. It includes not only standards identical to international ones, but also original ones, taking into account national peculiarities.

The project team of the NTI Competence Center for Big Data at MSU not only participates in international and national standardization. “We have created a model for evaluating the use of big data in a given organization. The toolkit allows you to independently assess, according to the main dimensions of the maturity model, how ready an organization is to use big data or is mature in this regard,” said Yuri Hohlov.

Vyacheslav Milovanov, business development manager at Paessler (sponsor of the session), noted that for a long time we have been taking smart manufacturing for granted. As a result of the arrival of digitalization in industry, it became necessary to continuously monitor not only classical, but also industrial IT infrastructures in production.

Then Maxim Galimov, product director of BIT “Master” LLC, spoke about the development of the organization’s vehicle fleet potential, based on the analysis of data on trips and routes for the digital plant.

The digital platform for industrial marketing management was the topic of the next speaker, Alexey Lukin, partner of MATE MARKETING SOLUTIONS.

The report “Data – New Oil in Industry 4.0” was presented by Konstantin Andreev, co-owner of Globus.

Maxim Borodko, technical director of UNITESS LLC, told the Summit participants about the Metrology 4.0 digital platform for automation of measurements.

The session was continued by Natalya Malkova, IT Director of Sintez OKA LLC. She talked about ways to create a human resources ecosystem for digital manufacturing.

Tatiana Vavilova, director of integrated projects at Mail.ru Group, made a presentation “End-to-end platforms as a tool for digital optimization”, in which she emphasized that at the moment most companies are at different stages of digitalization. At the same time, the goal is the same for everyone: to provide a quality of service at the level of digital giants, since this is exactly what users and business require. The presentation was continued by Evgeny Maksimov, corporate account manager at Mail.ru Cloud Solutions, who spoke about the benefits of cloud infrastructure for business.

Alexey Soldatov, general director of Datapro LLC, explained that the development of modern business and its modernization in the current realities can no longer be imagined without the introduction of digital technologies. Large companies, for which the security of their data to the highest standards is important, are increasingly resorting to the services of certified data centers.

The session was closed by the representative of the German company Knauf CIS, Thorsten Schubert, director of the department for finance, IT and administration. The speaker made an overview of the development of digitalization in the construction industry in recent years, spoke about the current state of affairs in this area, as well as the prospects for further development and technical capabilities in the coming years both in Russia and in other countries of the world where Knauf is represented.

The business program of the first day of the summit was continued by the session “Artificial Intelligence and Robotization”.

On the second day of the Summit (September 16), the sessions “Cybersecurity of industrial systems and business processes”, “VR / AR technologies – digital human capabilities in the digital era” and “Industrial Internet of Things – a driver of increasing production efficiency” were held.

In parallel with the business program of the summit, a focus exhibition was held on both days. Its exhibitors were: Adept, Veg Rus, Balluff, Revotech, Nauka, Paessler, CyberBook, PcVue Russia and the CIS, RTKloud, Datapro, Videosoft, EvriTag, GK Networks.

The guests of the summit appreciated the high level of organization of the event, the richness and relevance of the business program, as well as the practical orientation of the reports. Russian Intersectoral Summit “Industry 4.0. Digital Factory” was held for the fourth time, the next event with a similar theme will be held in the fall of 2022.